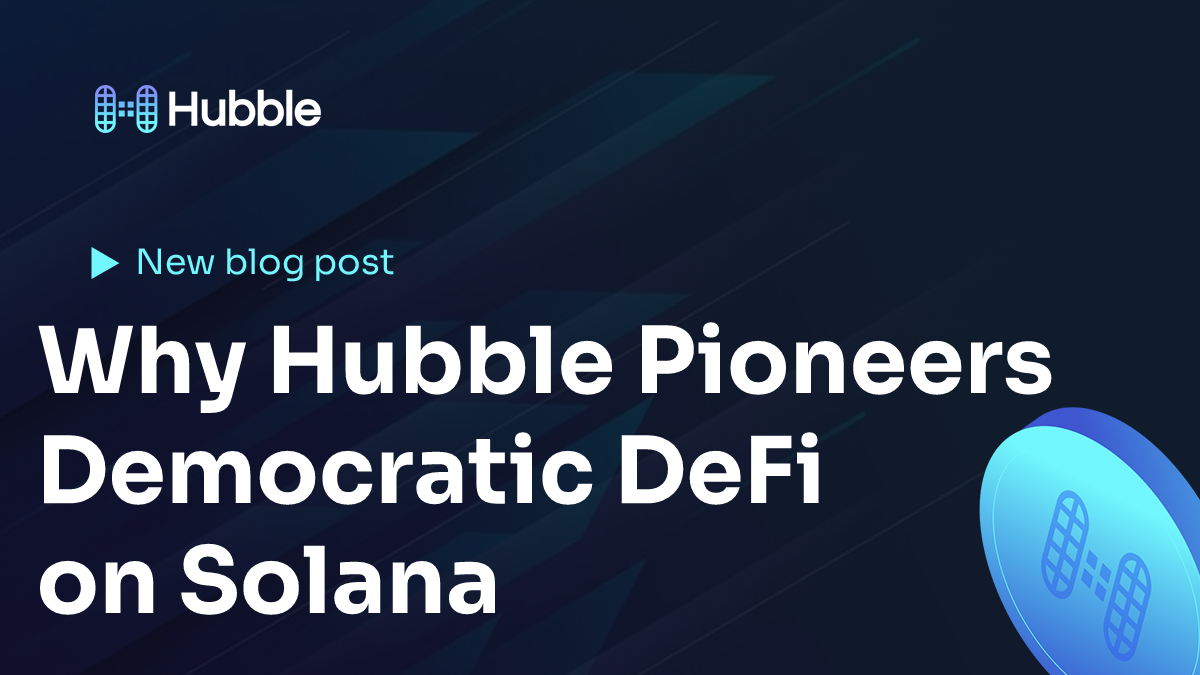 Thirteen years ago, there was only one public blockchain on Earth. The pseudonymous Satoshi Nakamoto launched the Bitcoin network on January 3rd, 2009, and from that day forward, the world was given a genuinely new and unique asset class.

Moreover, disruptive technologies were born out of Bitcoin’s launch, and these technologies would prove to have more use cases than supporting the existence of a cryptocurrency as time wore on.

Six years after Bitcoin’s launch, in 2015, a group of programmers decided to take the evolution of blockchain technology a step further than it had gone before, and they created a decentralized “world computer” that anyone could use.

Ethereum allowed users to build decentralized applications (dApps) on its network, and one of the most popular use cases for dApps became decentralized finance (DeFi).

At the tail end of 2021, six years after the launch of Ethereum, there are now dozens of decentralized networks that support DeFi dApps. One could say the DeFi community was spoiled for choice, but for Hubble, there was only one blockchain that made any sense for the protocol.

This article will explain why Hubble chose to launch on Solana.

The exact origins of DeFi can be debated for hours. Some have claimed that the birth of DeFi is traced back to the genesis of BTC, the world’s first decentralized crypto asset. Other sources assert that MakerDAO gave DeFi its first “significant use.”

All claims aside, DeFi first came to prominence during a massive growth spurt during the summer of 2020. Before the middle of that year, the total value locked (TVL) in DeFi smart contracts measured less than $1 billion, but around the cusp of May and June, the phenomena known as DeFi Summer carried DeFi’s TVL through the billion-dollar ceiling.

Experience the Speed of Solana with USDH

At this time, nearly all of DeFi was conducted on Ethereum (about 95% of DeFi transactions by some estimates). By the end of the year, DeFi’s TVL had risen to around $20 billion, with $270 billion in transaction volume recorded mostly on just one network.

DeFi’s growth was rapid in pace and enormous in scope, but Ethereum’s DeFi community was soon plagued by issues stemming from network congestion and Ethereum’s inability to scale. It seemed like DeFi on Ethereum had become a victim of its own popularity.

As congestion increased, transaction speeds on Ethereum began to slow down while their costs began to rise, and many users saw their transactions kicked back during fee spikes.

The undesirable effects of Ethereum’s congestion were further exacerbated by bots racing to outbid one another for miners’ priority. Miners would accept the transactions that were bundled with the highest amount of ETH, leaving many transactions unfinalized for retail users.

Consequently, the DeFi community began branching out onto other blockchains. DeFi protocols on other networks began seeing more traffic from wallets with Ethereum addresses, and as user traffic began to grow, the number of DeFi protocols began to grow on different networks.

Today, the DeFi landscape has transformed into a community that participates in protocols built across multiple chains. As a multi-chain DeFi ecosystem accommodates more and more projects and users, Ethereum now holds less than 70% of DeFi’s TVL.

Why Scalability Issues Persist on Other Chains

It can be said that most of the blockchains jockeying for a larger slice of the DeFi pie remain on the same well-worn path that Ethereum pioneered. As a consequence, most of these chains will face the same scalability issues that drove users away from Ethereum in the first place.

One improvement newer blockchains have implemented is moving away from a Proof of Work (PoW) consensus model towards alternative methods like Proof of Stake (PoS). This change increases the scalability of blockchains and nearly negates the burden placed on the environment by the energy-intensive mining process that facilitates PoW.

Even though PoS blockchains can scale at a better rate than the PoW blockchains that preceded them, most of these chains advertise transaction speeds and throughput that are relatively slow compared to Solana. Actually, many of these blockchains are slow when compared to the antiquated systems they’re supposed to replace.

Participate in DeFi on Solana with Hubble Protocol

Blockchains are expected to disrupt virtually every industry that depends on connectivity, security, and consistent record-keeping. However, that future will most likely go unrealized on networks that have difficulty outperforming Visa and other incumbents.

Visa’s transactions per second (TPS) currently outpaces every blockchain but Solana by a wide margin. If blockchains are supposed to exist on the cutting edge of technology, then why are these decentralized networks bested in measures of speed and throughput by Visa’s archaic infrastructure?

Turning to the software that powers a decentralized network, most blockchain projects are designed to be Ethereum Virtual Machine (EVM) compatible. This means that the dApps built on EVM-compatible blockchains are coded in Solidity, the programming language Ethereum developed specifically for writing smart contracts.

Now, one of DeFi’s main advantages against traditional finance (TradFi) is that DeFi operates on open and transparent distributed networks. The code that makes up DeFi smart contracts is completely visible to the world, and it can be reviewed by any party.

Transparency is a fantastic attribute for building a trustless financial system where information cannot be hidden from users. On the other hand, this transparency has been abused to the point that developers are copying and pasting code from other DeFi projects instead of spearheading innovation.

One of the biggest players in DeFi may have set a precedent by copying the entirety of another protocol’s code. When this happened, many accused the protocol of stealing, and its business practices were labeled as a vampire attack. Launching a protocol this way left the whole of the DeFi community on edge, wondering if the copycat decentralized exchange (DEX) was going to rugpull.

A year after this DeFi drama unfolded, the copycat project is one of the biggest names in DeFi and has copied and pasted its DEX onto numerous EVM-compatible chains.

The talking points around copying code have changed quite a bit (the term “forking” has become preferable to “stealing” or “copying”), and some will argue that copying battle-tested smart contract code is a safeguard against exploits and hacks.

On the other side of this argument, DeFi recently witnessed an exodus of liquidity from a dominant lending protocol when rumors spread that its smart contract could suffer from a vulnerability shared with another member of DeFi’s old guard. Over $137 million was stolen by exploiting this vulnerability.

Many security issues have been found in Solidity contracts through the years. With so much copying and pasting across EVM-compatible platforms, it seems like DeFi protocols are setting up their entire DeFi ecosystem for disaster by sharing the same potentially risky codes, and this is a major risk Hubble would rather avoid by building on Solana.

Solana departed from the majority of the blockchain world by deciding that Solidity wasn’t the best language for building smart contracts on its network. Instead, Solana opted to use a coding language that the programming community voted the most-loved programming language for six years in a row.

There’s a difference between copying code and using a toolbox of resources to save time and energy to focus on other things like smart contract logic. To that point, Rust has an incredibly well-developed toolbox that developers can lean on to make their lives easier, and these tools were developed by programmers at Google, Amazon, and Facebook, all of which use Rust.

Rust has been characterized as a complicated programming language to learn, but the benefits of breaking through Rust’s learning curve far outweigh the effort.

Rust is a secure and efficient programming language that suits DeFi smart contracts really well. If users combine the benefits of Rust with the way Solana’s architecture is designed, then there's actually the possibility of creating a new kind of system the whole world can use.

If Google was slow and expensive, nobody would use it. Hubble believes a protocol should be built that everyone can actually use, not just the people who have the funds to spend on high transaction fees. Solana makes that possible, and it opens doors to new possibilities for DeFi that cannot be achieved when scalability and cost are an issue.

Rust’s parallelization compliments the parallelization of Solana’s Sealevel, and the speed and throughput of Rust-based smart contracts on Solana are unmatched by anything written in Solidity for EVM compatible blockchains.

Solana’s Sealevel runtime knows what accounts will be affected by what transaction, allowing for non-overlapping transactions to execute in parallel. Since most users or contracts are independent of each other, users can have a chain that runs thousands of transactions per second.

The safety and performance that coding in Rust ensures are just a few of the many reasons why Solana kicks other blockchains’ butts. A total of eight innovations make it possible for Solana’s network to handle the massive amount of traffic necessary for leading DeFi and other blockchain use cases toward mainstream adoption.

By implementing a Proof of History (PoH) consensus mechanism and developing an architecture for smart contracts that can run tens of thousands of contracts in parallel, Solana can advertise speeds of up to 65,000 TPS.

Incredibly, these extreme speeds are also provided at extremely low cost. For example, the reported average cost for finalizing a transaction on Solana racks up to $0.00025. In comparison, Nasdaq reports that it currently costs around $150 to facilitate one transaction to buy an NFT on Ethereum.

Detractors have pointed out that Solana’s network experienced an outage in September when bots drove the network to 400,000 TPS, but this throughput is still incredibly high before breaking the network. In the future, it’s estimated that Solana’s TPS will safely rise above 700,000, and Hubble believes these speeds will provide an essential upgrade for DeFi’s bid at mass adoption.

There are tons of reasons why Hubble chose to develop a protocol on Solana. Many of them were highlighted by Reddit Co-Founder Alexis Ohanian during Solana’s Breakpoint Conference as he explained why he bet big on Solana to lead the development of Web3.

Hubble believes that DeFi has built the momentum it needs to begin breaking into the mainstream. As Web2 gives way to Web3 and more people begin interacting with blockchain technology without realizing it, DeFi should follow suit as it transforms into a financial system for the world.

The term DeFi 2.0 has recently become a popular way to describe a new generation of services within the DeFi community. The phrase is broad enough these days to mean many things, but its definition is clearly shaping up to signal that DeFi is finally seeking innovations that shy away from the practice of generating more and more copy-paste-style projects.

Hubble will focus on shaping the future of DeFi 2.0 and beyond. This journey begins by building a DeFi protocol that embraces innovation and aims to make sure all users can participate in DeFi .

Hubble begins its first phase of development on Solana by launching a borrowing platform that allows borrowers access to a capital-efficient 90.9% loan-to-value (LTV) on their collateral through minting USDH. USDH is a Solana-native stablecoin backed by multiple crypto-assets. It can be minted for a one-time fee of 0.5% against multi-asset deposits.

A long journey lies ahead for Solana and DeFi. There’s a whole universe of possibilities to explore when DeFi can operate on Solana’s 65,000 TPS and 400 millisecond block times, and the imagination runs wild when thinking about what DeFi will look like once Solana reaches a throughput of 700,000 TPS. 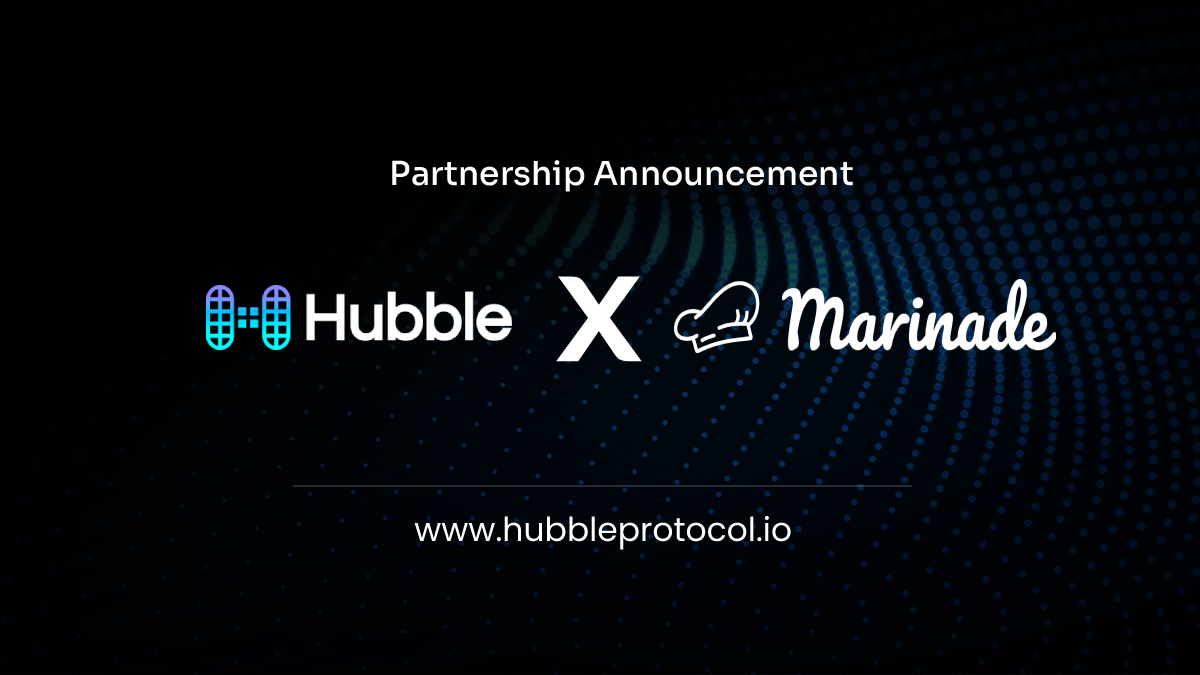 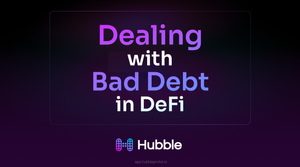 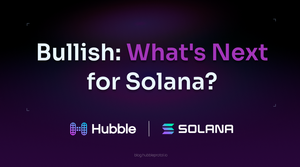 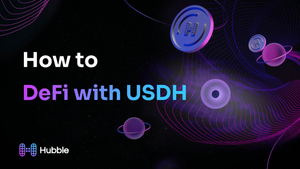 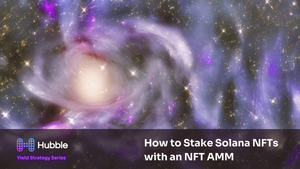